What we learned on Matchday 19

Matchday 19 provided us with yet more thrills in Germany’s top flight. FC Bayern not picking up three points but somehow increasing their lead at the top. Five goals in a frantic game between Augsburg and Werder Bremen and a feisty clash on and off the field between football and corporate football – I mean Borussia Dortmund v RB Leipzig. Let’s dig in.
Hamburger SV 1-0 Bayer Leverkusen – Hamburg continue their trait of being infuriatingly inconsistent and Leverkusen regret loaning out centre-back
On Friday night Hamburg hosted below-par Bayer 04. The Dinosaurs of the league vs die Werkself. With both teams suffering hurtful losses the week before, a positive reaction was of mutual interest. Hamburg came away from the game with a 1-0 win. Kyriakos Papadopoulos, the Greek centre-back (on loan from the visitors would you believe) scoring the only goal of the game and heaping more misery on his parent club.
With the vast array of talent Bayer possesses, it’s odd to see them performing so poorly. Currently sitting in 9th place, ten points off a Champions League spot. This will worry head coach, Roger Schmidt. No European football come the end of the season could be the nail in the coffin for him.
Despite the victory, Hamburg will be pondering why they can’t seem to establish some consistency. With the Red Shorts sitting in the Bundesliga relegation play-off spot (16th) (a position the club have become all too familiar with in the last few years) they’ll be looking to build on this hard earned win and survive yet another season in Germany’s first division.
FC Bayern 1-1 Schalke 04 – Bayern riding luck this season and Schalke bounce back superbly after disappointment the week before 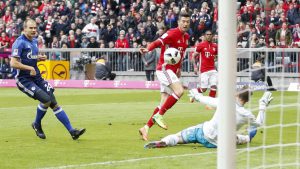 Bayern not picking up three points is considered an aberration in Germany. But this season has seen it happen a few times now. This weekend against Schalke 04 who battled well for 90 minutes and came away with what was a deserved point. They might even feel like they could have taken all three, some big chances went astray throughout the course of the match. Most evident was new signing, Guido Burgstaller hitting the crossbar. Then again, Robert Lewandowski went and did the same a few moments later.

Still, the Bavarian club have been riding their luck this season. Their lucky escape against SC Freiburg in the opening game of the Rückrunde is an exemplar of the Munich club riding their luck this season. Lewandowski stole all three points in that game which could have seen the three points go in favour of Freiburg on another day.
Booed off the pitch last week after a dire 1-0 defeat at home to Eintracht Frankfurt, the Gelsenkirchen club needed to give something else this week. And they did. A solid goalkeeping display from, Ralf Fährmann prevented their opposition from adding to their tally. A hard fought defensive performance, a creative and exciting midfield which supplied chance after chance. Leon Goretzka in particular had a very productive game. The only thing lacking from the Royal Blues was a clinical striker. Something maybe for them to look into in the summer. But Schalke can remain hopeful after that showing against the league leaders, but another outing like the one against Frankfurt the week before and it’s back to square one.

Boruss- A German team 3-0 SC Freiburg – Gladbach loving the second halves of matches and Freiburg suffer setback in their pursuit of a European place
Borussia-Park was my destination for this week. Gladbach up against Freiburg who have been the underrated story of the season. With all eyes on the despised RB Leipzig I suppose it’s no shock. In this match however, they showed their hand. A sizzling second half display from the Foals in which they scored three goals… again (they came back from two goals down at half time to beat Bayer Leverkusen 3-2 the previous week).
Lars Stindl is proving to be one of the Bundesliga’s best players right now. His sublime finish on 73 minutes was to be followed by a Raffael header, set up nicely by young German midfielder, Mahmoud Dahoud and then a deflected Patrick Herrmann effort that looped into the back of the net ensuring another good win for, ah I’ll just say it, Borussia Mönchengladbach.
Freiburg shouldn’t feel too disheartened after this loss. They were impressive in the first half but simply couldn’t handle their oppositions surge late in the second.
Hoffenheim, Hertha, Köln and Frankfurt are showing little sign of capitulation
These four sides have wowed all Bundesliga fans this season. Pushing their way in ahead of the teams that normally fill the rest of the top seven such as Schalke, Leverkusen, Gladbach and Wolfsburg. This weekend would see all of them take maximum points and continue their remarkable rises up the league.
Their first loss of the season the week before to RB Leipzig clearly didn’t stop them in their tracks. Hoffenheim were clear winners against Mainz 05, a team with the second poorest form in the league, just after Darmstadt. In this game they proved they have enough high quality strikers to replace the suspended, Sandro Wagner. With the goals coming from, Mark Uth, Marco Terrazzino and Adam Szalai who scored twice, Die Kraichgauer demonstrated why they are one of the highest scoring team this year.
Elsewhere for Hoffemheim, Rudy proved he can fit right in at FC Bayern next year and Kerem Demirbay’s ceaseless run of good form carries on.
Hertha BSC’s quest for Champions League football is still a strong possibility. In what was a rather drab match, they won 1-0 against FC Ingolstadt. The capital club might worry however about last season’s disappointing end in which they finished 7th despite having maintained a Champions League spot for the majority of the season.
Frankfurt saw off their great rivals SV Darmstadt at home with a more than satisfactory 2-0 scoreline. Darmstadt look all but certain to plummet into the second division at the end of the season.
Köln had to wait a while for it but Anthony Modeste’s penalty strike on 81 minutes led them to a 1-0 triumph over VFL Wolfsburg. Die Wölfe’s January transfer business has yet to take a real effect. Just three points from the relegation play-off place, they need to pick themselves up and fast.

Augsburg 3-2 Werder Bremen – Manuel Baum’s good start to life at Augsburg continues. Werder Bremen face relegation battle
It was scintillating to watch. Augsburg trailing 2-1 with eleven minutes to go, it was to a bitter result for the away side come the final whistle. A 79 minute strike from Ja-Cheol Koo put the two teams on level terms. Then in the 94th minute Raul Bobadilla, latching on to Koo’s cool pass, held off, Ulisses Garcia, and put the ball in the back of the net. Classic Bobadilla goal.
Bremen look very likely to face a relegation scrap when the end of the season comes. Alexander Nouri should take little blame if Bremen are relegated. He’s inherited a very average side it has to be said.
Finally on Bremen, their hopes of keeping Serge Gnabry in the summer are pretty slim. The former Arsenal man plays at too high a standard to remain at club that is performing so poorly.
Augsburg meanwhile are looking good under new coach Manuel Baum. A mid-table finish seems the most likely position for them now.
Borussia Dortmund 1-0 RB Leipzig – BVB show their good side and bad side
The weekend’s top game. Football tradition lovers, Borussia Dortmund up against a team that goes against everything they believe in. Tensions outside the ground had surfaced when it was reported that groups of Dortmund supporters and ultras ‘spat on’, ‘threw beer at’ RB Leipzig fans. Even those with children. The unpleasantness outside the ground thankfully wouldn’t transfer into the ground.

Dortmund’s Südtribüne had prepared banner after banner aimed at the Red Bull club. Messages such as ‘Feind des Fussball’ (Enemy of football) and ‘verpisst euch aus unserem sport sofort’ (F*** off from our sport now). I think the feeling towards RB Leipzig was clear.
The protests finished as the match began. Dortmund netted in the 35th minute. Ousmane Dembélé’s blistering pace took him past two RB defenders before whipping a ball in to Pierre-Emerick Aubameyang who nodded home. Dortmund could have gone on to put another three past their opponents. Reus and Aubameyang both guilty of missing big chances. It looked as if their carelessness in front of goal had come back to haunt them as RB Leipzig had the ball in the net with what would have been the last kick of the game. Federico Palacios Martinez ran away in celebration before seeing the flag had gone up. On close inspection, it was the right decision from the linesman. What a bitter ending it could have been for BVB.
It was a big win for Dortmund. A sour defeat for RB Leipzig. I guess you could say that tradition won. And that feels good to say doesn’t it?