The dreaded relegation playoff spot – Who falls in? 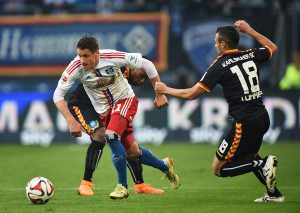 The Bundesliga is a lot like theme park. FC Bayern is the biggest, tallest, fastest ride on the park, dwarfing the other roller-coasters making them look obsolete. The ‘other roller-coasters’ are the likes of RB Leipzig, the new attraction that has got everyone talking about, whether it be for good or bad reasons. Borussia Dortmund is that ride that most people love, but simply can’t compete with the Bayern-coaster, not without some serious upgrades anyway. But with just two games remaining to this topsy-turvy campaign in Germany’s top-flight, a battle to avoid 16th place (aka the relegation playoff spot) is now the major attraction of the Bundesliga Theme Park.

SV Darmstadt confirmed their rather undesirable but inevitable relegation when they played FC Bayern last week, not the easiest of games to try and save your place in Germany’s first division. And barring something special from FC Ingolstadt who are away to high flying SC Freiburg this weekend, they look set to join Die Lilien in playing in the 2. Bundesliga next season. But who faces the gut-wrenching relegation playoff?

Bayer 04 Leverkusen sits in 12th place on 37 points, three points ahead of Hamburger SV who are once again portraying their strange love-hate relationship with 16th place. Die Werkself have had a largely inconsistent season. They sacked former coach, Roger Schmidt in early March of this year and his replacement was, Tayfun Korkut. A decision which hasn’t worked in the slightest, the new Leverkusen coach has won just one of his ten games since taking over, a 2-0 win away at Darmstadt. What’s more worrying is Leverkusen’s fixture list. It’s certainly no easy run in for Korkut’s men as they face FC Köln at home on matchday 33, and then it’s a tough trip away to Hertha Berlin. Two sides that have passed their expectations for this year while Bayer have not. Keep an eye out for this, Leverkusen might be about to record one of the most stunning relegations the Bundesliga has seen in recent years.

In 13th we have FC Augsburg on 36 points. Manuel Baum took over from predecessor, Dirk Schuster in December just before the winter break and looked to have had a positive impact, winning three of his first five games in charge, as well as holding Borussia Dortmund on their turf to a 1-1 draw. But it wasn’t long until Augsburg started to crumble and the losses came thick and fast. However, Augsburg won convincingly against fellow strugglers Hamburger SV two weeks back, and were agonisingly close to leaving Borussia-Park with all three points last week, only to be ruthlessly denied by a 94th minute goal by former favourite, André Hahn…ouch! But it’s a positive sign that Augsburg could beat the drop. What’s not so positive for them is their fixture list. A home fixture against 3rd place Dortmund followed by a troublesome trip to 1899 Hoffenheim on the last day of the season. Not an easy task for the Bavarian club and could prove too much. But in this manically inconsistent campaign in Germany, anything is possible.

14th is occupied by VFL Wolfsburg, who’s points tally reads 36. What a story this has been. From challenging FC Bayern to a Bundesliga title a couple of years ago, to fighting for their status in the first division. Having been a Wolfsburg season ticket holder for the first half of the season, I have had plenty of experience watching die Wölfe. Laborious, lacklustre and apathy was and still is the main story of this team that should be performing so much better. Three different coaches this season and still VFL face the potential of falling into the playoff. They’ve flirted with it all season, but now it’s a very surreal possibility. Andries Jonker was appointed as the third boss to manage Wolfsburg this season in late February, taking over from the incompetent, Valérien Ismaël. Like Schuster, he enjoyed a decent start with wins over RB Leipzig and Darmstadt. Also, overseeing the outrageously enthralling encounter between themselves and Leverkusen in which they came from 2-0 down to be leading 2-3 in a seven minute Mario Gómez hattrick, before Leverkusen youngster Kai Havertz scored in the 89th minute to deny the Wolves a win. With fixtures against, Borussia Mönchengladbach at home, and then a journey to play Hamburg in what looks like it could be the playoff for the playoff right now, they too face a relatively tricky schedule. Should Wolfsburg find themselves in 16th come the end of the season, they would likely play either Hannover 96 or Eintracht Braunschweig, two big enemies. It’s an exciting prospect, but one that’s unlikely to occur. Wolfsburg should pick up at least three points against one of their next two opponents, which should see them escape from the playoff spot.

In 15th are Mainz 05 on 34 points. The club has stuck with trainer, Martin Schmidt all year. An admirable move considering he has given a lot to the club in his time there. But now his managerial skills are to be tested harder than ever. Mainz enjoyed a relatively solid start to the season. However, inconsistency became a problem. Mainz have failed to record back to back victories since 21st August when they defeated Werder Bremen 2-1 at the Weser-Stadion, before that game beating FC Augsburg away 3-1. The inconsistency has caused FSV to plummet further into the deep realms of the Bundesliga table. Last week’s wretchedly woeful 0-0 encounter between Hamburg and Mainz demonstrated Mainz’s flaws. Mainz had twice the amount of shots in that game yet forced a third of the saves that Jannik Huth in the Mainz goal had to make. If Mainz are to avoid the playoff, they need to be ruthless in these last two games. They face their rivals, Eintracht Frankfurt this weekend followed by a trip to Köln on the last day. With Frankfurt possessing the second worst form in the league after Hamburg, a win is a must for Mainz 05.

Finally, we reach the relegation playoff spot which is taken up by the dinosaurs of the Bundesliga, Hamburger SV, also on 34 points. Hamburg have survived the relegation playoff two of the past three years…just. An away goal saw them scrape past SpVgg Greuther Fürth in 2014, the first leg 0-0 in Hamburg and the second in Fürth finished 1-1. Then who could forget that mind-blowing clash between Hamburg and Karlsruhe. HSV were literally seconds away from relegation before, Marcelo Díaz scored in the 91st minute to keep Hamburg up (at the time at least). Extra time followed and Hamburg went on to win 2-1. Last season was an improved 10th place, but this season has seen them fall to their old tricks. Could it be third time unlucky for the Red Shorts? They face the up and down, Schalke 04 this weekend and on the final day, as aforementioned, VFL Wolfsburg.

This weekend’s run of fixtures may give us an indication as to who will likely be playing in the relegation playoff in a few weeks’ time. Like much of the Bundesliga, it’s going to impossible to predict. So much can happen in just two weeks. Still so much drama to unfold. So, sit back, and enjoy the relegation playoff dogfight that’s about to take place. All of this said, the team who ends up 16th come the final day will probably win the playoff anyway.