Part one of my weekend trip completed in Düsseldorf, part two would take place at the RheinEnergieStadion. FC Köln’s home ground and one of the venues of the 2006 FIFA World Cup. Inside the ground were 50,000 supporters – a sold out match! Unfortunately what I and 49,999 others were about to witness wasn’t to be the greatest of football games. 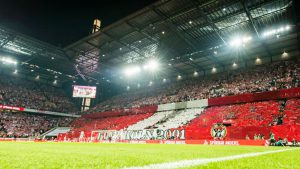 The atmosphere, as always in the Bundesliga, was electric. Köln’s pre match anthem was blaring out and the scarves were being waved from every corner of the ground. It made for an impressive sight. The Augsburg fans down to my right hand side were noisy and kept up their chants and claps all game long. Despite the dullness that was taking place on the field.
The first half was by and large, the more eventful of the two. Oskao of Köln wriggling his way past two defenders before forcing a strong save by Marwin Hitz. In form Frenchman, Anthony Modeste would come close with a header but the ball sailed harmlessly over the bar. Konstantinos Stafylidis of Augsburg came close with a free kick in the first half. Thomas Kessler of Köln, in for the injured Timo Horn, producing a fine save to match a well hit free kick. It was Augsburg who certainly looked the most threatening in the opening thirty minutes. After twenty-five minutes Kessler was tested again. This time from open play. A fiercely struck shot from Philipp Max from outside the area once again forcing the thirty year old keeper to parry the ball. Marcel Risse would be the next to try his luck from outside the area. The Köln number seven striking with a curling effort. The ball however, curled wide of the goal. The first half not great entertainment, but bearable. The second half might well have been a preseason friendly, the tempo was missing and the chances were minimal.
Osako and Modesete would be the Billy Goats’ only threatening force in the second half. Both failing to hit the target however, causing danger nonetheless. Substitute Marcel Hartel nearly grabbed all three points at the end for the home side. Finding himself with room to hit a volley inside the area which he did well, but it was straight at the Augsburg goalkeeper, Hitz.
Well not the most enthralling of football matches but thanks to the Köln and Augsburg fans, it was just about worth it. Both provided a top atmosphere for what was a rather tedious game.